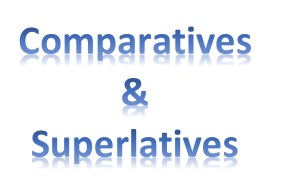 Today we are going to talk about comparative and superlative adjectives. I am sure you all have seen sentences like the following:

Now look at these sentences:

We use the superlative forms when we want to say that someone or something is the best (or worst) .

In order to know whether we need to add a prefix (-er for comparative or -est for superlatives) or the words more (comparative) or most (superlative) before the adjectives, we need to check the number of syllables they have and follow the rules below:

Note that some adjectives form the comparative and superlative forms in an irregular way:

Good – Better than – The best

Bad – Worse than – The worst

Far – Further than – The furthest

Far – Farther than – The farthest

Then, what if I want to say that something is not better or worse but equal to something else? Then I use the following structure:

Do you want to give it a try? Go to the following links to practice comparatives and superlatives:

Have an awesome week and a great Thanksgiving! 🙂